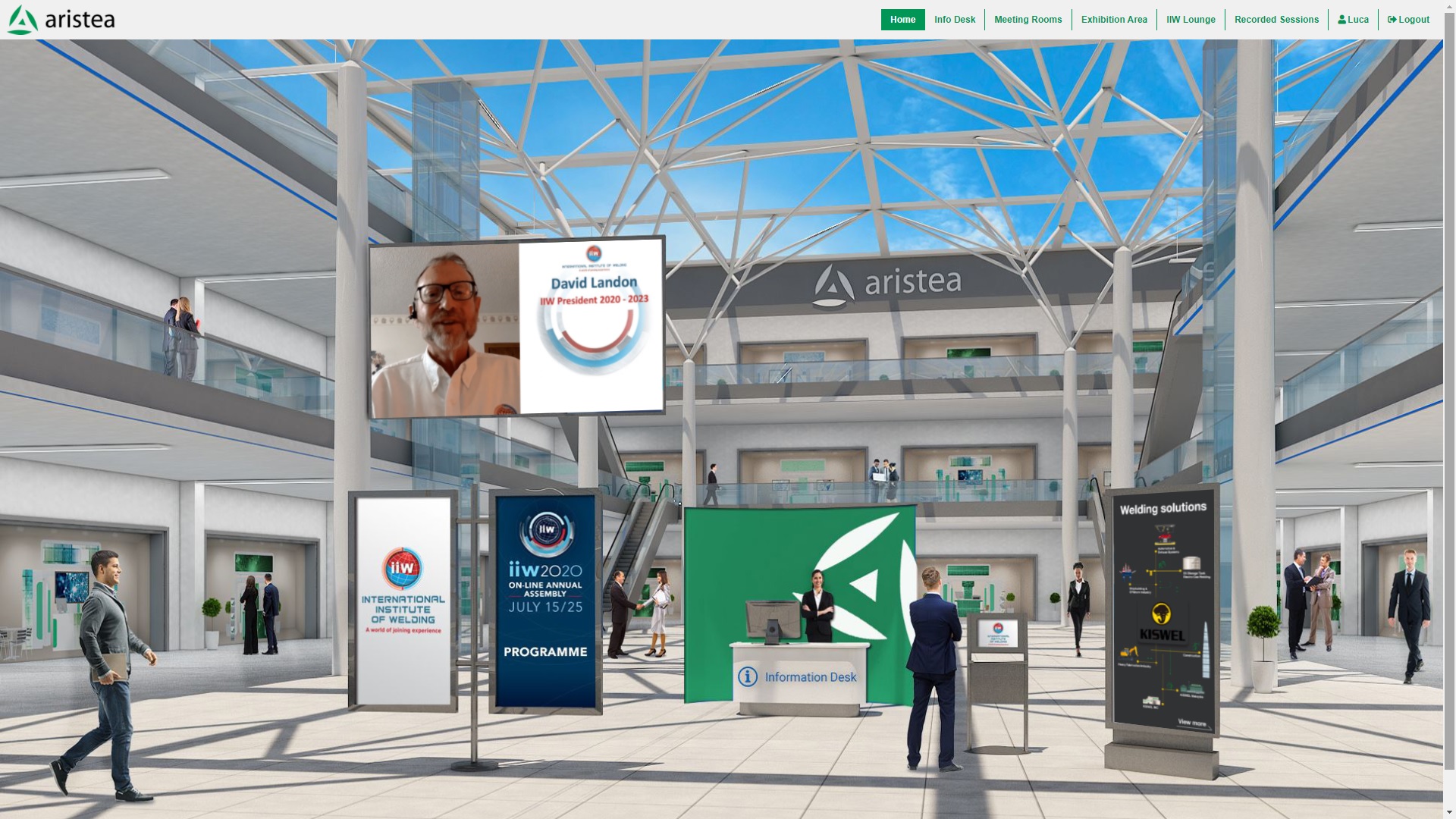 Having duly considered the restrictions assocaited with the COVID-19 Pandemic, IIW decided to cancel the Annual Assembly and International Conference initially planned in SIngapore and to run the Event on-line.

IIW succeeded in managing it’s technical and scientific activities through a virtual working environment which allowed all the groups to meet, discuss, recommend and develop deliverables as usual.Here are some figures to highlight the success:

The IIW moves to Italy with a new CEO 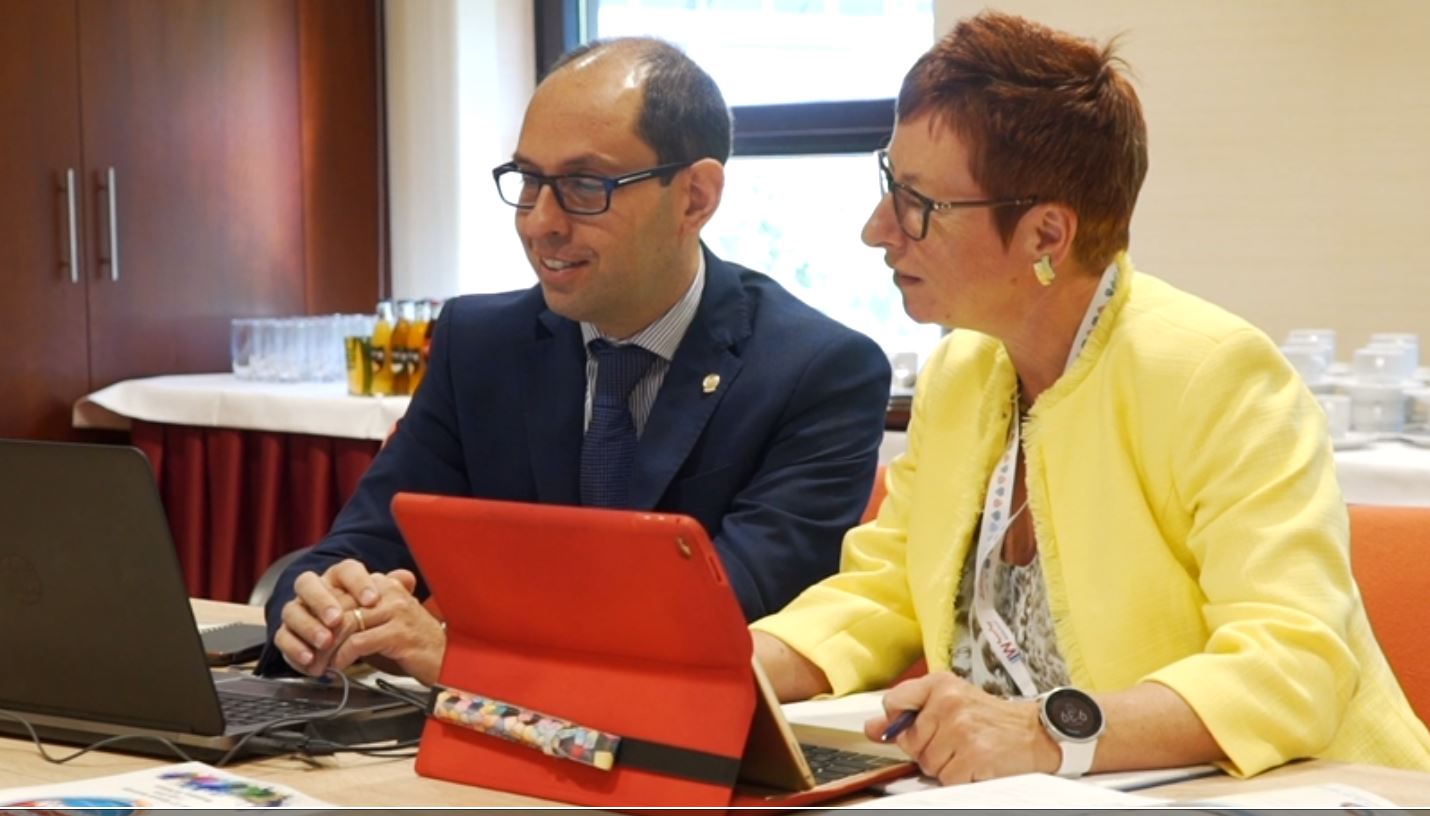 Upon decision taken at the extraordinary Assembly held on 7 July 2019 in Bratislava, the host country of the Secretariat and thus the organisation itself is moved from France to Italy.
Dr Luca COSTA is appointed as the new IIW CEO, and the address of the organisation is now Lungobisagno Istria 15, 16141 Genoa (Italy).
The services for the IIW General Secretariat will be delivered by Istituto Italiano della Saldatura, the Italian Institute of Welding (IIS Group), a founder member of the IIW.

The IIW is taking a new direction

Looking back to 25 years of history 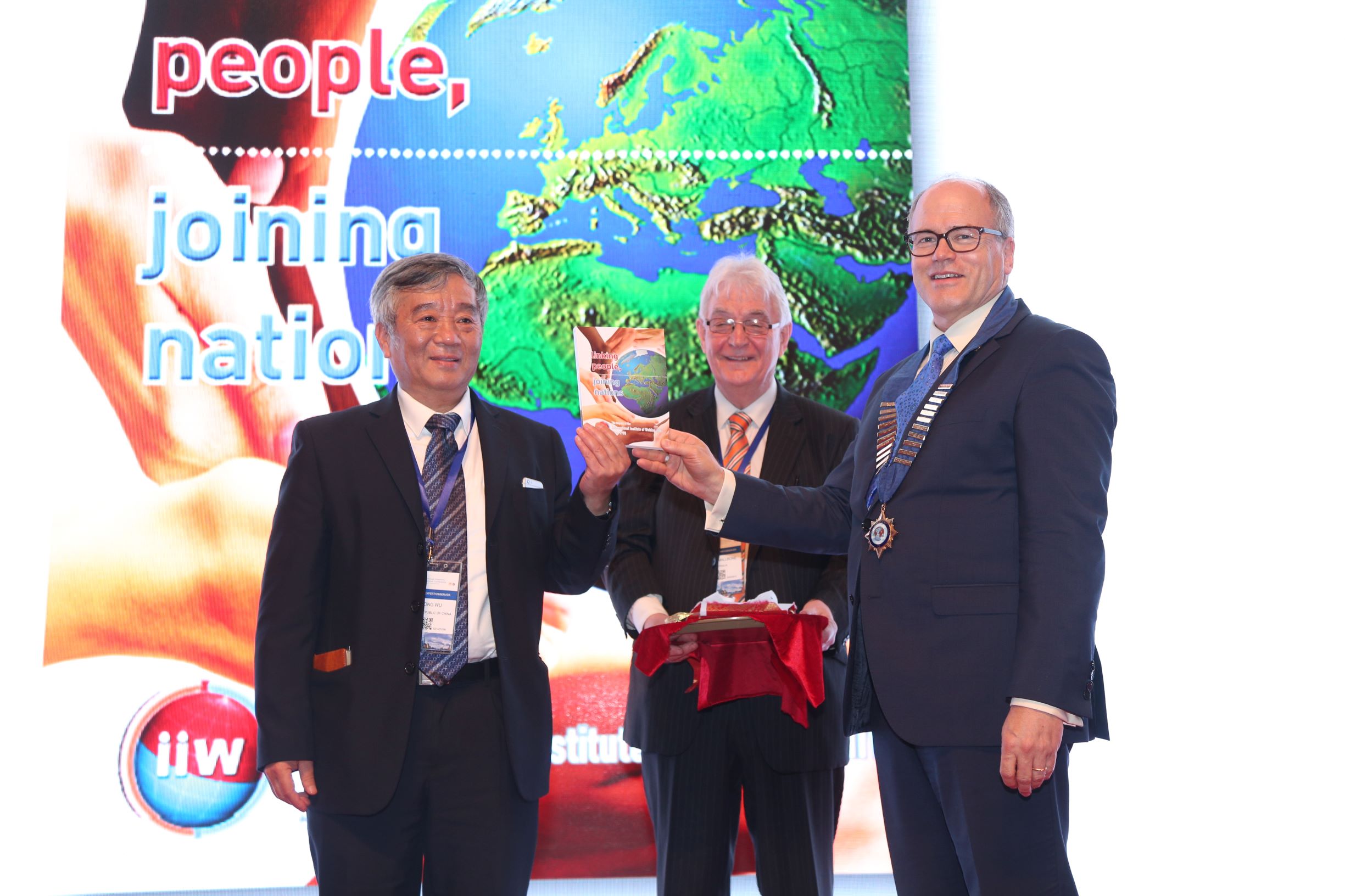 During the 70th IIW Annual Assembly in Shanghai, P.R. China, a new book on the history of the organisation was shared with the community. More than 40 contributors participated in the preparation of this outstanding book covering the period from 1990 to 2015.

From in-house to professional publishing

The change from in-house to professional publication, through the partnership with Springer, resulted in the exposure and the growing influence of the “Welding in World” journal within the scientific community.

The rise of Young Professionals

Start of the IIW fellow programme 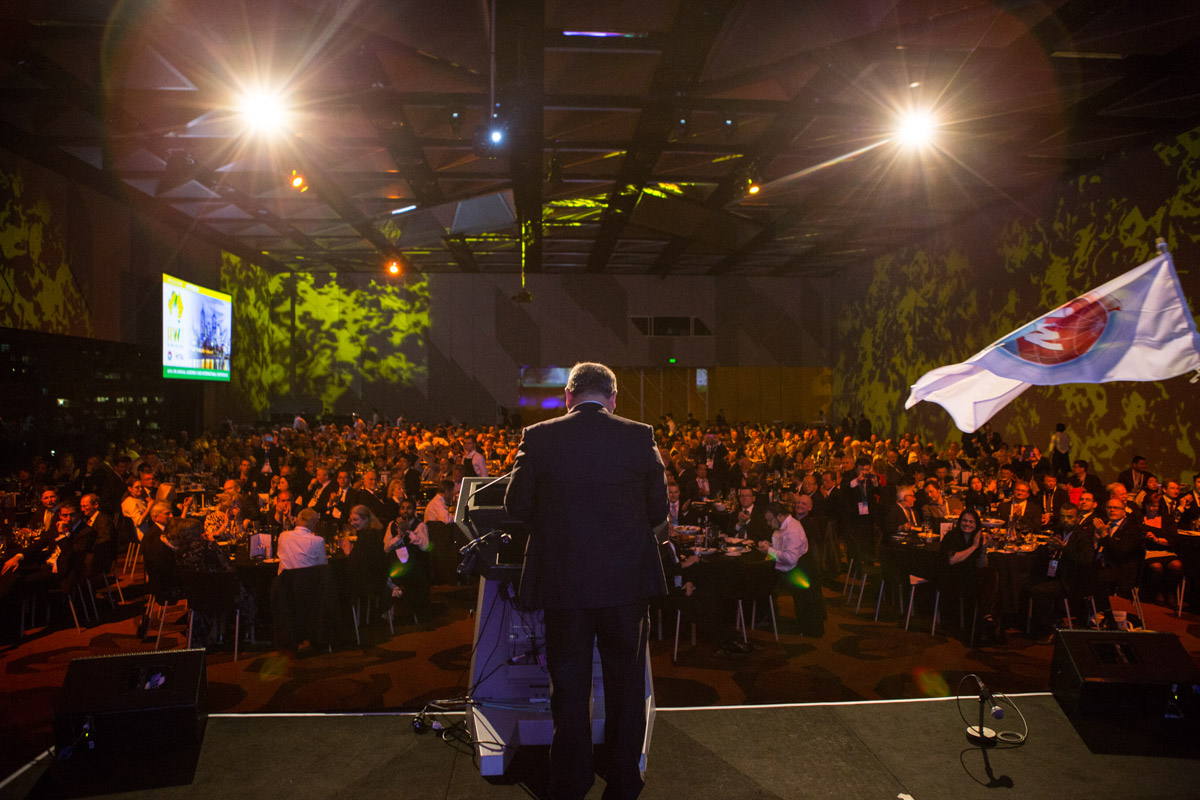 Launching of the Fellow of IIW (FIIW) award, which celebrate lifetime achievement through distinguished contributions to the field of welding science and technology, and for promoting and sustaining the professional stature of the field. The first awards were presented in 2015.

Development and upliftment of the National Welding Capability 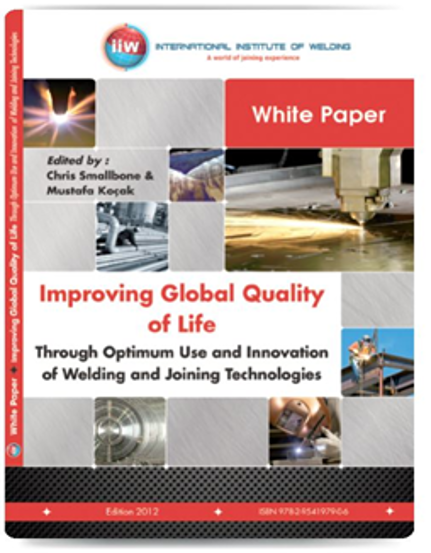 The IIW White Paper published with the financial support of several Member Societies and prepared by IIW experts from around the world was a means of stimulating interest in the development of a shared vision of a sustainable and desirable future.

A major milestone for the IIW qualification & certification system

A historic year for the International Authorization Board (IAB), during which over 10 000 diplomas were issued for the very first time. 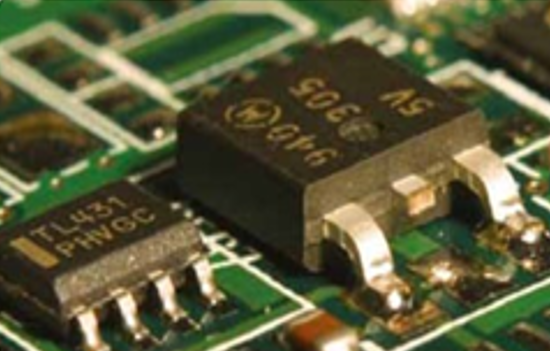 IIW has improved the service provided to the membership through the launch of a set of modern online services. The new website became available on 2010.

To encourage young people's participation in IIW, a special registration category for events was created with the support of DVS, the German Member Society.

IIW as mirror of political upheavals 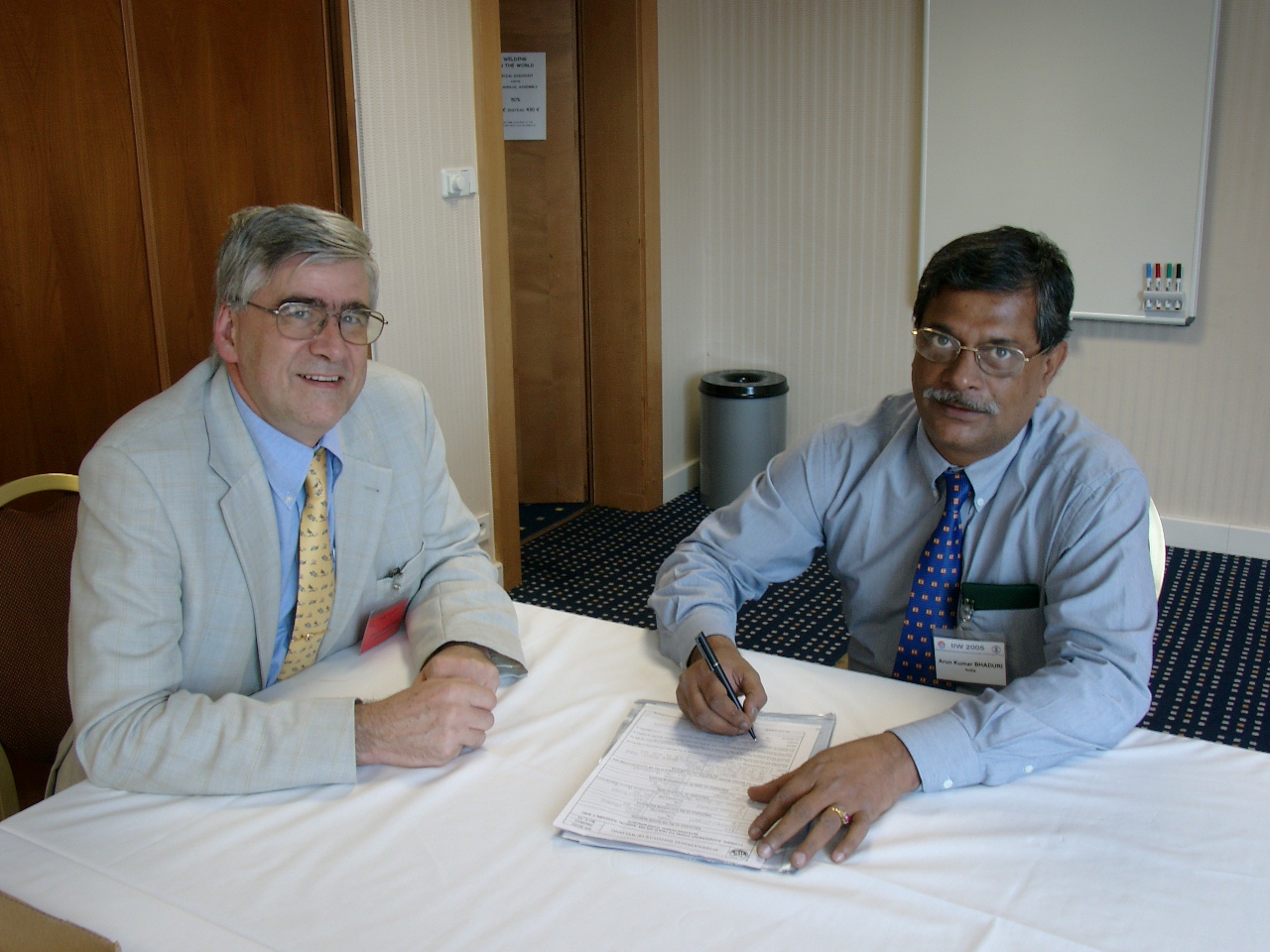 IIW’s membership always reflected the world’s political changes: in the 90's, when several countries broke up into distinct countries, e.g. Yugoslavia and Czechoslovakia, members were added to or re-joined IIW. In the early 2000’s new members, e.g. Nigeria, Morocco, South Korea, made IIW truly representative of the world at large. The Arab Spring led some countries, e.g. Tunisia and Libya, to suspend their membership.

The birth of a Task Group Governance

Task Group Governance (TG-Gov) appointed to investigate the present governance situation of IIW and make adjustments or changes where appropriate.

The key points of this business plan were: “Drafting of best practices for sustainable development; Development/implementation of ETQ&C programmes on a global basis; Promotion of IIW in all regions of the world; Implementation of IIW’s outcomes; Provision of quality services to IIW Member Societies and other organizations.” 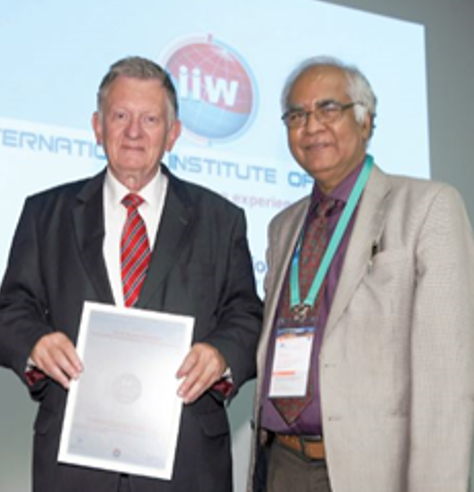 In the permanent lighting of its men and women, IIW launched a new awards system recognizing its members’ attendances of over 40, 30, 20 and 10 years at Annual Assemblies.

Signing of a Memorandum of Understanding with WorldSkills International

IIW signed a Memorandum of Understanding (MoU) with WorldSkills International, whose competitions at all levels provide a means for young vocational welding trainees to display their skills and improve the image of welding as a career.

Release of IIW Statement on Manganese summarizing evidence from scientific literature and making recommendations for the control of exposure and future research.

The rise of India

IIW organized the first IIW International Congress in India (Mumbai), a devoted and active member to the cause of promotion and advancement of welding science and technology.

Countries join to be stronger

The National Welding Societies of Bulgaria, Romania and Serbia & Montenegro established the South-East European Network (SEENet) for welding technology transfer in the region.

Title of the “Technical Committee” created in 1990 changed to “Technical Management Board”, that gave it more visibility and authority with responsibility for the general policy and objectives of all IIW’s scientific and technical activities and their role in producing standards.

The principle of cohabitation

ISO accepted the principle of “cohabitation” that allows two paths for a standard in the case where two somewhat different systems of national/regional standards have evolved in the world market, e.g. for welding consumables.

The changes of Beaufils

The incoming CEO Daniel Beaufils improved the Secretariat's operation, on many levels: new software, upgrading of the technical database, improved and user-friendly version of the website, changes to the Secretariat staff.

The first country outside of Europe to have its IIW Authorised National Body (ANB) approved was China, then Japan, Australia and the USA. By the end of 2004, over 24 000 IIW diplomas had been issued and the IIW International Authorization Board (IAB) network consisted of 34 active ANBs.

The birth of an IIW International Authorisation Board

Launching of the first website before a newly revamped version in 2001 that aimed to create a user-friendly browsing experience. By 2003, IIW also refined the content for an enhanced user experience in storing and distributing Working Unit documents.
1998
1998

Italy and the UK became the first countries to have an authorized National Body for Company Certification (ANBCC) through EWF.

From professional to in-house publication

Elsevier, who had bought out Pergamon Press in 1992, ceased publication of Welding in the World. This has led IIW to resume in-house publication until 2012, when a partnership was created with Springer.

A new IIW Constitution was approved at the San Francisco Annual Assembly and whose main changes were: “the Executive Council renamed Board of Directors, Governing Council renamed General Assembly, and a limit set on the Chairs’ terms of office.”

The establishment of a single secretariat

The concept of a single secretariat had been considered since the early 90’s. After years of numerous heated debates and interactions, at the Stockholm Annual Assembly, Institut de Soudure (France) was finally awarded the merged Secretariat role.

IIW, bilingual (French/English) since its foundation, adopted English as its only official language towards the goal of speaking with one voice.

The Governing Council unanimously approved a resolution to go ahead with an IIW global education, training, qualification and certification (ETQ&C) scheme.

Creation of a new Executive Council

European partnership arrangement for the recognition of welding qualifications

EWF, formerly known as ECCW, extended a partnership arrangement for the recognition of welding qualifications to all countries in the European Union as well as to some Eastern European countries.

Following the signing of the Vienna agreement, ISO, CEN and IIW concluded a tripartite agreement.

Welding in the World

Cooperation agreement signed with Woodhead Publishing for re-design and e-publishing of IIW books.

Moving towards a new vision

In March Dr Eaton reported the provisional findings of the first strategic planning group to the Executive Council. At the subsequent Montreal Annual Assembly, he mentioned that IIW faced new challenges and opportunities in a time of rapid change, thus introducing a new vision for IIW - Towards 2000.

Introduction of a computerised database as the first step towards electronic document management.

Since the distance from certain regions precluded their greater involvement in IIW activities, e.g. attending Annual Assemblies, it was proposed to hold regional congresses. The first IIW Regional Congress was held in Hobart, Australia.

In 1985 IIW applied to ISO to become an international standardizing body. By ISO resolution 24-1986, IIW was officially approved to develop standards in the field of welding and related processes.

Welding in the World

To increase Welding in the World’s sales it was decided that Pergamon Press would take over publication of the journal.

Foundation of the European Council for Cooperation in Welding

In 1974, the European Council for Cooperation in Welding (ECCW) was founded to meet the wide interest and need prevailing in Europe for harmonising qualifications of welding professionals, such as welding engineers, technologists, specialists and welders.

First publication of Welding in the World 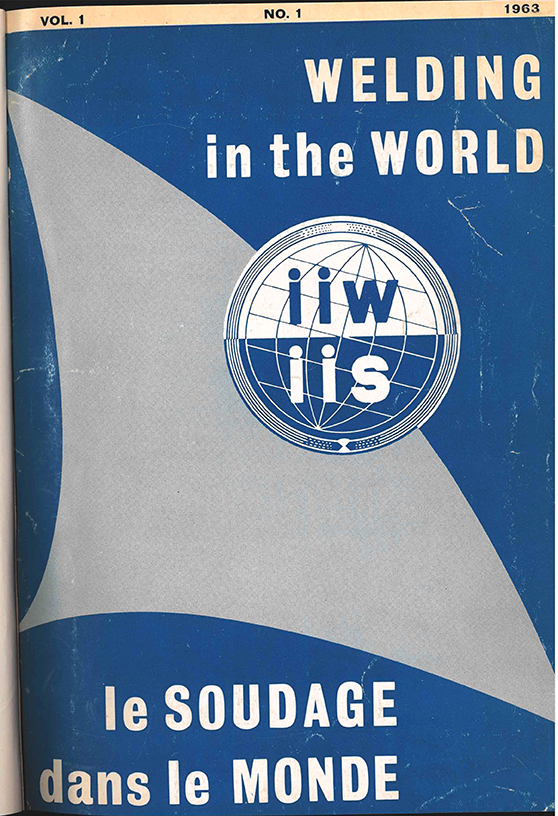 Guy Parsloe, Secretary General, a strong advocate of the Institute's involvement in documentation and terminology, was particularly interested in the dissemination of the IIW's work . In 1962, the Institute's journal Welding in the World was first published directly by the Institute. The journal was bilingual (French/English) with Parsloe as joint editor in chief and André Leroy, Scientific and Technical Secretary as publication coordinator.

Launching of the International Institute of Welding (IIW)